That is sad to learn that the world, specially the strongest economies and the most powerful countries on the face of earth, care and spend more on killing their own kinds and each others than caring and spending on their well-being! The U.S. outpaces all other nations in military expenditures. The world military spending totaled more than $1.6 trillion in 2015. The U.S. as we see in the diagram below, accounted for 37% of the total. U.S. military expenditures are roughly the size of the next seven largest military budgets around the world, combined. Interestingly, a third world country, Saudi Arabia, that basically survives on oil resources, and now seems not to have an immediate enemy, such as Iraq in the past, is the third leading country in the world on military spending, even more than England, France, Japan and many other countries! (1) 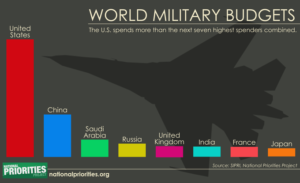 The military spending of the united states swallows more than half (54%) of this country’s total budget, as we see in the diagram below, while science takes only 3%, education and health only 6% each! (2) 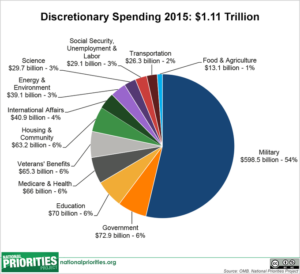 While, the health and science portions of the US budget are trivial, the medical research in discovery of new treatments and the well-being of people comprises only a small portion of this skim budget. The NIH (National Institute of Health) of US invests nearly $32.3 billion annually in medical research, more than 80% of this funding goes to the universities and medical schools than the community health centers, the first gates of entry of people into medical arena, seeking help and treatment. As we see in the graph below, more than three times of NIH budget, i.e. $98.3 billions are only spent by the top 10 pharmaceutical companies in US, not on improvement of the people’s health or even drugs research, but on marketing. The amounts spent on sales and marketing are shown in orange, while the amounts spent on research and development are in blue. (3) 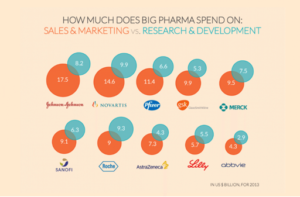 Now lets see, how this meager amount of money spent on the health research that is the main focus of this article. Spending less money and efforts by the governments on the health research could be at the first glance, the reason of humans’ failure to overcome common and simple disabling and killing diseases. But probing deeper into the issue, reveals that even the meager health research budget are not spent wisely, and while there are many researches, there are very few discoveries and solutions.