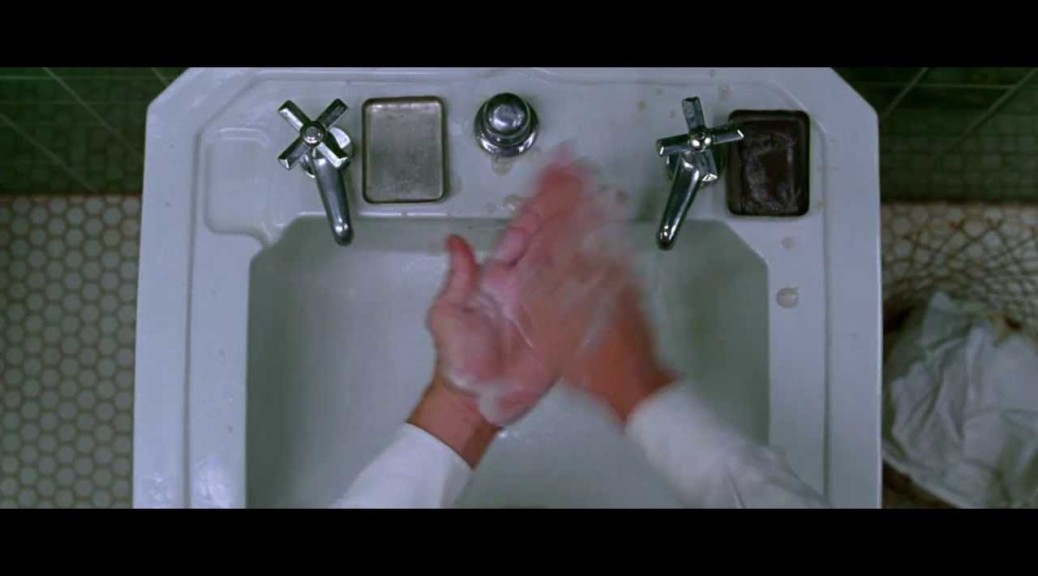 “The boy who could not stop washing” or “When once is not enough”, two book titles on Obsessive Compulsive Disorder (OCD) that tell a lot about this devastating behavioural and mental condition. This illness that can start as early as early teens, is not limited to washing and cleaning, but obsessions about tidiness, orderliness, checking, rechecking and more. Obsession is a repetitive anxiety provoking thought that something is not clean, tidy, organized, in order, not right, etc. that will not leave the inflicted individual alone. Then the person feels obliged to do something to stop the burdening thought (compulsion) that leads to “compulsive act” that is washing, cleaning, ordering, tidying, checking and rechecking until feels satisfied that is hard to reach. Associated or underlying this chain of thought (obsession), urge to act (compulsion) and the act (compulsive act) are, “doubt” and “superstition” that things are not clean or right the way should be, and if not act upon, some harms will befall on the individuals or beloved ones. Then rituals will come to play, and the person in the eyes of others could appear not anymore as a clean, tidy, or a “perfectionist”, but as totally insane who has lost his touch with reality and cannot be convinced by others. The cases that come to medical attention, are usually more than a mere perfectionism and consists of all the above, that makes it very hard to treat.

The big question is that what causes OCD, specially from an early age. Is it a personality that is labeled “obsessive compulsive personality”, or is it rooted in “perfectionism”, or in anxiety-ridden subjects, or is it genetic and familial? The fact is that many of OCD patients, have had no obsessive compulsive personality, or perfectionism, no history of previous anxiety and none of their other family members suffer the same. The etiology is still unknown, hence the treatment is incomplete and failure in many instances and prevention is not in agenda as nobody knows how! In this article, I will attempt by search in the available literature to answer some of these dilemmas and somewhat clear the path to the treatment and hopefully the prevention.

Did it all start from a “sore throat”?

Sore throat is a very common and recurrent infection in childhood world-wide that ends a lot in tonsillectomy. One of the most common and accepted from of latent infection, causing damages some time after its acute impact, is the infection by streptococcal bacteria. Infections by this bacteria that exist in every human’s respiratory system, waiting for the compromise of their immune defense, than attack and become virulent, are the leading causes of morbidity and mortality after Tuberculosis world-wide. The group A of Streptococcus (Strep. A), causes of the common sore throat and skin infections, pneumonia and meningitis, mostly in children is responsible for over half a million deaths yearly globally. (1) Two common latent damages of Strep A infections are Rheumatic Fever and post-streptococcal glomrulonephritis, both occur about 1-4 weeks after a sore throat infection or pharyngitis or skin infection. These damages are the earliest after an acute infection, so they are well known in medicines and among physicians and the cause and effects are un-debatable. Rheumatic Fever which is a very serious and severe inflammation of the heart, inflicting children world-wide, later on migrates to affect joints and even brain. The damage to the heart could be permanent, causing Rheumatic heart disease that is damages to the heart valves, currently affecting more than 18 million victims world-wide. (2) Post-streptococcal glomerulonephritis is inflammation of the kidneys, leading to damages to this vital organ, high blood pressure, renal failure and has caused 19,000 deaths in 2013. (3)

A later latent impact of Strep A infection is a neurological movement disorder, Sydenham’s Chorea that can occur months after the initial attack, causing jerky involuntary movements, muscle weakness, slurred speech, and personality changes, again mostly in children. PANDAS (Pediatric Autoimmune Neuropsychiatric Disorders Associated with Streptococcal infections) syndrome is similar to Sydenham’s Chorea, but without motor dysfunctions, and instead with tics and/or psychological/behavioural symptoms, e.g. OCD and occurs much earlier, days to weeks after strep A infection. (4) The common occurrence of tics, Tourette syndrome (a vocal tic disorder with occasional inappropriate and obscene vocal exclamations) (5) and obsessive, repetitive and compulsive behaviours among children, a period after infections, specially sore-throats with commonly Strep A have caused some suspicions among researchers over the past two decades for the infective causation of OCD. This suspicion initially started with the evidence of some auto-immune changes in OCD subjects. Roy and colleagues in 1994 (6) reported significant levels of antibody for somatostatin-28, its C-terminal fragment somatostatin-14, and prodynorphin, and in contrast lower levels of reactivity for somatostatin-28(1-14) (the N-terminal fragment of somatostatin-28) and negligible reactivity for several other peptides including beta-endorphin and corticotropin in OCD subjects compared with normal controls and a few other psychiatric and neurologic disorders.

Soon Allen and colleagues (7) in a review and case series study reported via a process analogous to Sydenham’s chorea, infections with group A beta-hemolytic streptococci, among others, may trigger autoimmune responses that cause or exacerbate some cases of childhood-onset obsessive-compulsive disorder (OCD) or tic disorders (including Tourette’s syndrome). In their paper in 1995, these researchers reported four cases of boys aged 10 to 14 years with abrupt, severe onset or worsening of OCD or tics after recent Strep A or viral infections. Two of these children were treated with plasmapheresis, one with intravenous immunoglobulin, and one with immunosuppressive doses of prednisone, and all showed a significant clinical improvement immediately after treatment. This study for the first time suggested a diagnostic classification for such post-infectious OCD or tic disorders as “Pediatric Infection-Triggered Autoimmune Neuropsychiatric Disorders (PITANDs). This classification soon by one of the members of this original study Swedo in 1998 (8) changed to the now popular term of PANDAS (Pediatric Autoimmune Neuropsychiatric Disorders Associated with Streptococcal infections). The obsessive-compulsive and tic symptoms in PANDAS are characterized by acute and dramatic onset with a relapsing-remitting course and significant psychiatric comorbidities, e.g. emotional lability, separation anxiety, nighttime fears and bedtime rituals, cognitive deficits, oppositional behaviors, and motoric hyperactivity.

Not funny and more powerful than Kung Fu PANDA:

PANDAS that may remain in the readers minds in an analogy with Kung Fu Panda, with its above-mentioned characteristic symptoms seem to be occurring mostly in childhood and not in later teen years or in adult onset OCD. (9) This distinction has made some experts to classify OCD to early (prepubertal) versus later onset and tic-related versus non-tic related subtypes, that are post-infectious vs. non-infectious origins. (10) This subtype classification has not only etio-pathologic significance, but treatment applications as post-infectious subtypes respond very effectively to plasma exchange and immunotherapy. (11) Such treatments have been ineffective in non-infectious childhood-onset obsessive-compulsive disorder. (12) The post-infectious early childhood onset of OCD and tic disorders also differ neuro-anatomically by the enlargement of basal ganglia of the brain. (13-4) The size of basal ganglia has also been corresponded with higher anti-streptococcal antibody titers. The pathophysiologic mechanism of OCD and tic symptomatology production seems to be the cross reaction of antistreptococcal antibodies with basal ganglia neurons and disruption of basal ganglia-thalamocortical circuit. (15) Obviously not everyone infected with Strep A will develop PANDAS, as this condition is rare beyond age 14, with only 1%, also not everyone with this autoimmune condition, will develop OCD, but about 37% and 14% develop tic disorders, but 81% of the subjects had prior infection with Strep A. (8) These statistic facts will lead us to the existence of a probable genetic or immunity susceptibility as more than half of first-degree relatives of PANDAS subjects have been estimated to suffer from full clinical or subclinical OCD and obsessive-compulsive personality, and about 40% have history of motor or vocal tics. (16)

Moreover there is an increased rate of immune-related symptoms and syndromes among primary OCD adult patients in comparison to other anxiety and mood disorder groups. Therefore it could be plausible that some other immune compromise (s) may be responsible for the causation of adolescence and adult onset OCD. (17) Further support for such theory comes from the association of Myelin oligodendrocyte glycoprotein (MOG) gene, important in mediating the complement cascade of the immune system and primary obsessive-compulsive disorder. (18) Furthermore Autoimmune disorders have been reported more in the mothers of children affected with PANDAS. (19) To bring the PANDAS or childhood onset autoimmune OCD to the adult onset OCD, recently it has been shown that about 20% of such adults have sero-positivity for anti-streptolysin-O titers (ASO) and anti-basal ganglia antibodies (ABGA) compared with a control group of individuals with depression and schizophrenia. (20-1)

OCD is perhaps the most heterogeneous psychiatric disorder, not only in symptomatic presentations, e.g. some obsessed about cleanliness and germs so washing and cleaning repeatedly, others obsessed about orderliness, or checking and rechecking out of self-doubts, still others obsessed about hoarding and collecting, or some superstitious to unrealistic levels bordering with psychoses, and some having rituals with or without superstitions. In children, OCD may be associated with other symptoms such as different motoric or vocal tics primarily and not as complications. The age of onset and the course of illness also seem to be quite heterogeneous among different patient groups. The childhood onset with a more acute onset and exacerbations, though may run a chronic course, is principally associated with tics and tic disorders. The late onset that could start in adolescence and young adulthood run a slower onset and course of illness and is not associated with tics and tic disorders, may run a short or long course. (22-23)

The childhood onset as outlined here so far seems to be definitely an autoimmune disorder with a probable infectious origins, e.g. streptococcal, viral and others.(24-5) The only homogeneity in OCD seems o be the relative early onset of the illness across its spectrum of any types, so makes it rare to have an onset after the second decade of life, and equality of prevalence between males and females (22, 26). Therefore DSM-5’s clamping all OCD spectrums together as “OCD and its related disorders” will not help to identify the etiology of these disorders so to find the efficient treatments and hopefully one day its prevention.(27) To achieve this importance, we need to perhaps trace the endophenotypes (28) or the pathophysiologic link between the childhood and adult onsets of the disorder, though they may appear different on the surface. (20-1) The adult onset that does no harbor a clear cause such as offending microbial causes, may be a byproduct of latent infection(s), long before in childhood, perhaps not severe enough to cause any symptoms then, but later in life. The proof of this may not be shown only by probing for antibodies of the offending agents, but by following any autoimmune traces of the original insults, or genetic mutations (29) that makes this disorder across its spectrum very inheritable. (30)

The candidate genes in adult onset OCD span across different but specific brain regions and neurotransmitters, e.g. the neuronal glutamate transporter gene (SLC1A1), the serotonin transporter promoter variant (5-HTTLPR) La vs. (Lg+S) alleles; COMT Met/Val; and the serotonin 2A receptor (HTR2A) genes and loci. (31-2) To show the complexity of the situation in tracing the genetic mutations in genome wide association, pooled genetic analysis and metanalytic studies, any of the above so far evidenced genetic links with their multiple polymorphisms that have to be specifically identified for their roles in the transcription of different OCD symptoms. As discussed elsewhere     ( 33-5), SNPs (single nucleotide polymorphisms) and CNVs (copy number variations) that are the genetic traces of mutations by microbial invasions in many human diseases from autoimmune disorders, to cancers and psychiatric and neurological disorders have been spotted across all our pathologies. Therefore we need to concentrate all our efforts in identifying these SNP and CNV mutations than limiting ourselves to conducting genetic linkage studies even genome wide association studies as the results will be all generic, not specific!